In a recent Harlam conversation Lamo admitted to a weird thing he does, (Among quite a few others). When he is out and about he finds himself patting the trunk of trees whilst giving them a friendly greeting, “Hey old fella how you doing?”, or if it is more of a sapling, “Alright young un, how are things?”, as he feels that these amazing pieces of nature do have a life to them above perhaps that of maybe the dumber plants that grow? What he means here is that other plants don’t have that intelligence, or deep rooted connection to Earth, that gives them this living, breathing almost sentient existence? He can feel the life in them through that simple touch like you would another humans hand.

Whilst on a roll he went even further to put forward the thought that they communicate with each other in some way.

This comes from a weird experience he had, some may say an epiphany. (Others might say lunacy of course).

One day whilst it was raining, he was out walking, having stopped at a large old tree having given it a friendly greeting and a little conversation, he then carried on walking. As he did though, he had this epiphany through a strange observation.

He felt that after he had given this touching acknowledgment to one of their kind, this tree had then somehow let the others on his path know to try and keep him covered from the rain. Almost like it had passed on a message to the others saying; “Hey you lot look after this one, he is one of our friends”. Why did he think this? Well for some reason he noticed that there were less raindrops falling on him under the trees than other people around him. He then asked Harlin if she thought him mad like others did, her reply though was “Psychs”.

Harlin then said a very similar feeling was within her, she too talked to trees. Describing the pain she felt when she saw trees being cut down, pruned or mutilated by the modern age human race, Harlin’s words in this conversation  were so touching, we have written them as they were said then;

“They trigger emotions in the strangest way within me. If I see a tree being cut… I call it a murder. It makes me sad. I mean they too have their body smell… the very fragrance which we humans sense when the big trunk gets chopped down into tiny pieces. “

Then we got back to the way we believe they communicate, Lamo wondered if somehow they have a 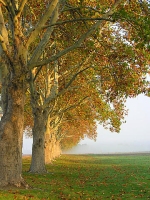 subterranean root phone like system that carries those conversations between them. Harlin though added this beautiful idea to this.

“With that perhaps even the silence becomes audible when wind blows through leaves. Whispers become songs of nature. Spring and autumn are like their festive season, not ours.”

Whispering to each other through the voice chords of their branches and leaves to each other, a thought that also struck a chord, (Pardon the pun), with him?

How could we even begin to summarise this huge thought about these overlooked guardians of us and the very planet we call home, that we ALL live on? For both of us we see these amazing, let’s use the word beings, as so old and wise, passing perhaps all that they have seen over millions of years down to the next generation that grow to keep watch over us, that keep Earth itself breathing. Unfortunately a belief shared by far too few these days.

What would happen on a world without trees is the question that people should perhaps be asking?

One thought on “The World’s Whispering Trees”